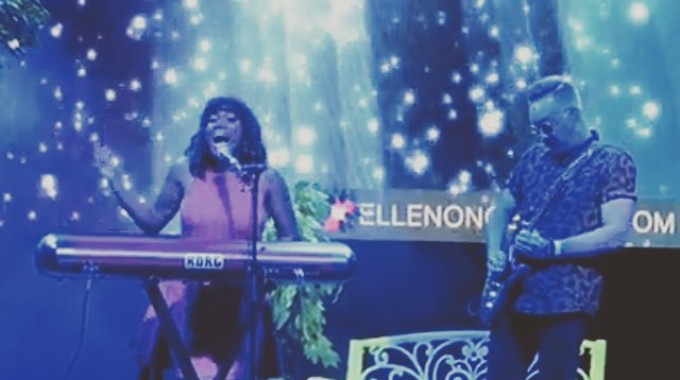 What a blast it is to play with an artist I’ve produced! I get to watch the songs that were once just little programmed baby-demos become real live breathing entities that are shot out into the world through amplifiers, microphones and speakers and watch that energy affect people. I. Love. It. I was playing with Ellen Once Again tonight for the Dallas RAW Artists Festival, and it was incredible! We played on the main stage in front of TONS of people. My favorite moment was probably playing “Neon Lights and Stardust” one of the new singles off of Ellen’s new EP, titled “Another Chance To Live.” It’s a heavier dance vibe (which of course, I loved doing) than her last singles, and has her own perfect pop flair to it.

Ellen’s been seeing some great successes lately. Her song “I Do” has been featured on Glee, Dance Moms, PopSugar, and several other shows on NBC. It’s very cool to watch all this happen after just conceiving a little idea in our studio in Dallas. Her EP (available now on iTunes) also features Jeremy Lutito on Drums and Tony Lucido on Bass. They’ve both played on some amazing records from Ingrid Michaelson, Kelly Clarkson to The Doobie Brothers. Always incredible to make such amazing music and watch it grow and get “out there!!” SO go now and check out her stuff!! Here’s a link to my SoundCloud so you can preview it before you buy it. Because…um….you will BUY it, right?? 🙂