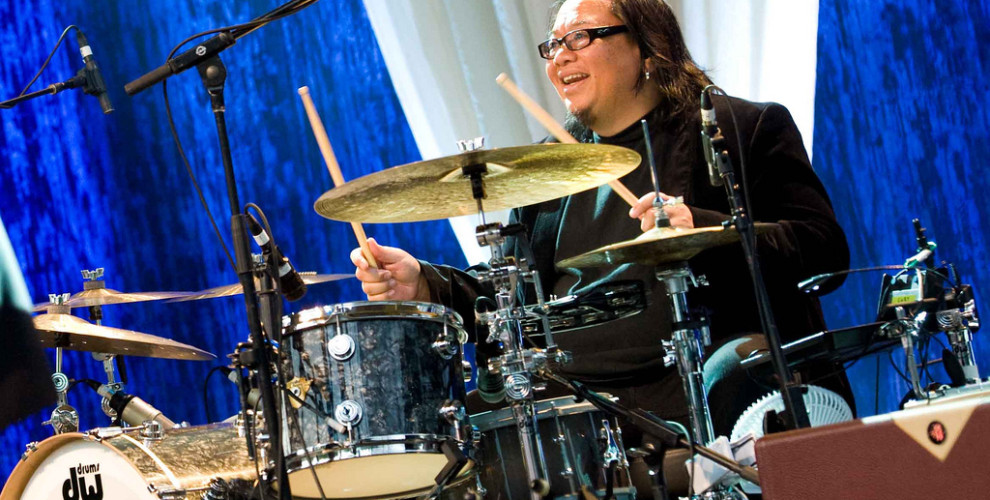 Well, when it comes to drummers – I’ve been a lucky guy. I’ve played and recorded some of the best, but there are few that can compare to Curt Bisquera.

I first met Curt on the first record I did with Bradley Prakope (Plee – Heirloom). We were introduced by a good friend (the equally legendary) Bob Parr. Bob knows just about everybody in the business, and was able to hook us up with Curt’s number. Since he loves doing cool indie records, and Bob was already hired to be on bass – Curt was in.

As I understand it, Curt got his first break in the business on Bonnie Raitt’s “Something To Talk About” single. Yes, that song. He’s also the drummer on Seal’s first record. Holy shit. He’s also played with Mick Jagger, Sir Elton John, Tom Petty and the Heartbreakers, The Dixie Chicks, Sarah McLachlan, Chris Isaak…are you starting to get the picture? He’s a monster. You can check out his credit list here.

Although I’ve got a few to choose from – my favorite memory of Curt was at the end of our first record together: and I think this speaks volumes of his personality. We had just spent a week recording at Panhandle House up in Denton and we were all exhausted. I was SO ready to go home, and Curt was scheduled to fly back to L.A. the next morning. It was super late and dammit – my car wouldn’t start!! “Luckily” for me I had manual transmissionin my car and there was a hilly road just outside the studio. So you know what that meant: if I could get a push, I could start the car. Who was available for pushing? Not many options. But you know what? The next thing I knew it was after 2am, and there’s the legendary Curt Bisquera helping me push start my car down the road. That’s the kind of guy he is. He doesn’t have an ego, even though he is by FAR the most “worthy” of all players I’ve worked with to have one (not that anybody should). Thanks again for that, Curt. I still can’t believe you did it. 🙂

Another memory that sticks out is when I went to NAMM a few years ago with Bradley. Curt had been telling us to make it out, so we finally caved and went (THAT was a crazy experience, in it’s own right). When we met up with Curt, he walked around with us and introduced us to a bunch of people. I am not exaggerating when I say that every. single. person. hugged him and treated him like their best friend. Why? Cause he’s effing Curt Bisquera, that’s why!! He is an L.A. “A” Team session musician, and one of the nicest, hard working guys I’ve ever recorded with. He set the bar for me on what kind of attitude to have in the studio (even when you’re a massive session superstar) and I am so lucky to call him a friend and mentor.

Do yourself a favor – next time you need drums, hire Curt. Don’t settle for your buddy’s brother or someone that’s cheap. Your record deserves to have the best on it and Curt is one of them, if not THE best!! I made a playlist of some of my favorite tracks he’s played on for us below. Check them out and enjoy!!